By extraction of rock sample by ASE or Soxhlet, an extract can be optained which can be analyzed like an oil, for instance MPLC separation, bulk carbon isotope analysis or even n-alkane CSIA. 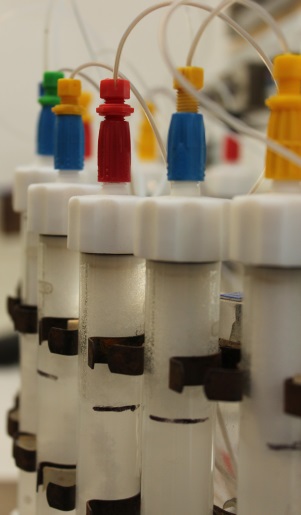 Oil can be separated by MPLC into saturates, aromatics, resin and asphaltenes (SARA) fractions. Subsequentely, the (bulk) stable isotopes of each of these fractions can be analyzed by EA-IRMS

Analysis of carbon and/or hydrogen isotopes on the n-alkanes in an oil or mixture. N-alkanes will be separated from the oil/mixture before the analysis using the method as described in Grice et al, Organic Geochemistry 39 (2008) 284–288. Because of this pre-separation, high precision results can be obtained. The analysis will be done at least in triplicate and will be calibrated regulary against various isotope standards.

In the range propane-toluene the carbon isotopes of ca. 19 components will be analyzed depending on their relative concentrations. Analysis can be done on oil as well as gas samples and will be performed at least in triplicate.

Besides CSIA where each component is individually analyzed, samples can also be analyzed in bulk by elemental analyzer isotope ratio mass spectrometry (EA-IRMS). Some of the possibillities are: